The signing ceremony was held at the Murmansk Oblast Government offices in Murmansk, with the Norwegian Foreign Minister Jonas Gahr Støre present.

“I am delighted to see that the good cooperation between the Norwegian oil companies and Murmansk Oblast is strengthened,” said Gahr Støre. “The Norwegian government  actively supports cooperation in Northwest Russia and the sharing of the Norwegian experience from developing oil and gas at the Norwegian Shelf.”

Based upon the previous efforts of both Statoil and Hydro in the region, the agreement has been divided into five main areas of focus, namely industrial and supplier development, university cooperation, social responsibility activities, environmental projects and municipal support. 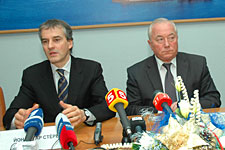 The Norwegian Foreign Minister, Jonas Gahr Støre, here seen at left, was present at the signing.

“The signing of the new MOU is a demonstration of continuity and long-term plans towards our region, said the Governor of Murmansk Oblast, Juri Evdokimov, after signing the agreement. “We will further develop our cooperation and join our efforts for the benefit of our region.”

Working groups with representatives from both StatoilHydro and Murmansk Oblast Government will start work immediately in order to cooperate on the various elements of the agreement, which has a time frame of three years.

“The ongoing efforts in partnering with local government and industry in Murmansk Oblast are creating results,” said Bengt Lie Hansen, president of StatoilHydro Russia after signing the agreement.