Technology for improved oil recovery has contributed 60 million barrels in additional production from the Gullfaks field in the North Sea. (Photo: Øyvind Hagen)


A number of the fields operated by the group on the Norwegian continental shelf are already world leaders in terms of their recovery factor.

She will be presenting the group’s work in this area during the StatoilHydro energy seminar taking place in Bergen today, 25 February. 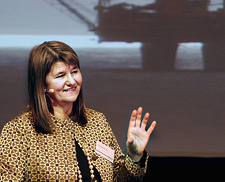 “Many large oil fields on the Norwegian continental shelf (NCS) are aging, and their production is in decline,” she notes. “That makes it important to develop and adopt IOR technology.

“It’s also essential that we search for solutions which will allow us to develop small discoveries in a cost-effective manner.”

She identifies the development and broad adoption of IOR technology as an important factor if StatoilHydro is to reach its ambitious recovery goals for the NCS. The programme for testing new technology gives weight to the group’s focus areas for reservoir monitoring and intelligent drilling.

Using four-dimensional seismic surveys has yielded an average increase of 5% in reserves across fields because production wells can be sited with greater certainty.

“That’s contributed 60 million barrels in additional production from Gullfaks,” Ms Øvrum remarks. “But we and our partners are going a step further on Snorre."

“Fibreoptic cables have been laid on the seabed there to enhance reservoir monitoring and see how oil and gas are moving. We can then drill more precisely for remaining reserves.”

She reports that StatoilHydro is testing technology which will help to make it easier and cheaper to drill, and that the group can drive wells into more demanding reservoirs than before. 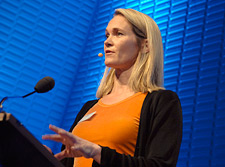 “We’ve used managed pressure drilling on Kvitebjørn and Gullfaks with great success, for example. This means we can get at reservoirs previously beyond the reach of conventional methods.”

IOR projects sanctioned by StatoilHydro last year will provide additional reserves corresponding in size to the Kristin field in the Norwegian Sea.

More than half this volume comes from drilling more drainage and injection wells in the reservoirs, and the rest from low-pressure output, water and gas injection and other methods.

“Since the merger, we’ve developed working methods which show our results from IOR with greater clarity,” says Hege Marie Norheim, vice president for reserve and business development on the NCS. “That improves our opportunities for achieving synergies across fields in this area.”