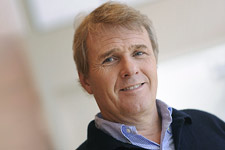 Øivind Reinertsen, head of Statoil’s upstream activities in the US.

"St Malo is a major discovery in ultra-deep waters of the Gulf of Mexico, and we are pleased to strengthen our position in this development", says Øivind Reinertsen, heading up Statoil’s upstream activities in the US.

"This is a new frontier for all oil companies, and I’m excited that Statoil is such a major player here,” he adds. “We bring in technology and extensive offshore expertise which we believe will benefit us and our partners in developing this play."

The Jack and St Malo discoveries are both in the lower tertiary trend of the deepwater Gulf of Mexico, commonly known as the Paleogene play.

Statoil is the third largest leaseholder in these ultra-deep waters which include an additional two discoveries. Statoil is also currently engaged in two deepwater Gulf of Mexico drilling operations.

Statoil is an international energy company with over 35 years of experience on the Norwegian continental shelf. Today the company has operations worldwide.