A pipeline was being replaced, following the completion of maintenance on a choke valve, when a gas leakage occurred in the well area on Gullfaks B. Approximately 730 kg gas is estimated to have leaked in a period of one hour, with an initial emission rate of 1.1 kg/s. 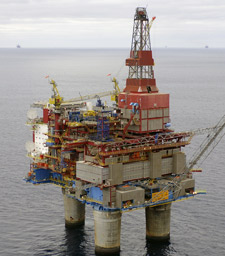 The Gullfaks B platform in the North Sea. (Photo: Øyvind Hagen)

The well was shut down prior to the incident and the probability of the gas ignition is considered by the investigation team to have been low.  All crew members not involved in emergency response tasks mustered in lifeboats and the situation was normalised after about two hours. No lasting injuries were incurred as a result of the incident.

The incident arose because the main hydraulic valve was inadvertently opened allowing gas to leak out through the main manual valve into the well area. Two of the automatic shut-down valves were set to such a position that it was impossible to close them from the platform’s control room.

“We took this incident most seriously. Our internal investigation report, which we presented to the Petroleum Safety Authority Norway today, will be used actively in our improvement efforts. We have identified improvement areas within management, our competence and within technical areas. A dedicated project headed by the operative line has been set up to implement the necessary measures,” says Gunnar Nakken, who is in charge of production on Gullfaks.

A unanimous investigation team has classified the risk of fire or explosion as low.

This is due to the fact that the incident took place in an area where there were no open sources of ignition and where there were automatic gas measurement and shut-down systems. In addition, an automatic sprinkling system was triggered. The documented technical status of the detection and fire-fighting system on Gullfaks B is good.

”The investigation has therefore concluded that circumstances would have to have been considerably different for the leaked gas to ignite,” states Nakken.