“Statoil has evolved from mainly a Norwegian player into a global company well situated in the most attractive areas worldwide. We have developed a sharper profile and today are strongly positioned as a technology-driven upstream company. This is where we are at our best,” says Statoil’s chief executive Helge Lund, looking back on the past decade.

“Since the stock exchange listing in 2001 the company has undergone sweeping changes, but we have maintained the same foundation throughout the period,” Lund emphasises.
.
”Safe and effective operations represent the backbone of our enterprise. Competence, technology and innovation are still our key competitive advantages. And our focus on the Norwegian continental shelf (NCS) combined with international ambitions add value in the long term,” Lund says.

Through the merger with Hydro’s oil and gas division the company strengthened the basis for further development on the NCS and its international competitiveness. In addition the company has over the past ten years undertaken other transactions and structural initiatives that have bolstered its operations, such as the stock exchange listing of the fuel and retail (petrol station) business. 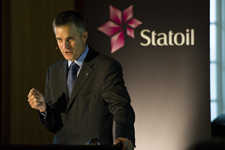 Chief executive Helge Lund took a retrospective look at the rapid development that has taken place since the company was listed in June 2001.

Lund emphasised that Statoil has delivered strong and competitive returns to its shareholders over the past decade compared with its international peers.

Great potential on the NCS

The company has a leading position on the NCS, and during the anniversary celebration Lund highlighted new and extended perspectives for the North Sea, the Norwegian Sea and the Barents Sea.

“The NCS is not just a mature region – it also represents new and exciting high-potential frontier areas. We recently made one of the most important discoveries in the past ten years on Skrugard in the Barents Sea. We regard this as a breakthrough for our exploration model,” Lund maintained.

Statoil has a portfolio of existing and future projects on the NCS that are internationally competitive, with break-even prices of USD 40-50 per barrel. The company continues to make discoveries and will prioritise exploration in the North, Norwegian and Barents seas also in the future.

In the Barents Sea the Skrugard discovery holds promise of a new Norwegian petroleum province. Statoil recently got access to new attractive acreage in the area and looks forward to learning more about areas that may become available after the signing of the maritime delimitation treaty with Russia on 7 June this year.

Statoil has gone from producing less than 100,000 barrels to more than 500,000 barrels per day internationally over the last few years. 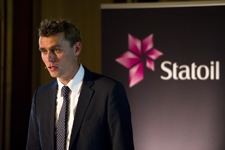 Minister of Petroleum and Energy Ola Borten Moe participated during the celebration of Statoil’s anniversary at Oslo Stock Exchange.

In the past six months Statoil has announced safe start-up of  production both on Peregrino offshore Brazil and the Leismer demonstration project in the Canadian oil sands. When Peregrino reaches plateau production next year Statoil will be one of the largest operators in Brazil, second only to Petrobras. Positive discoveries in Peregrino South have confirmed that Peregrino also has a considerable upside potential.

Statoil has acquired a leading position within exploration and future increased production in the Gulf of Mexico, and is one of the largest licensees in the area. In addition the company has secured attractive exploration acreage in areas such as Brazil, Indonesia, the African east coast, the Faroe Islands, Greenland, Alaska, Canada, and in the Caspian Sea.

In Angola, negotiations are underway regarding final contract conditions after Statoil was assigned the operatorship of two blocks and participation in three blocks in pre-salt areas in the region. This is a frontier province with a great potential and with geological similarities to the pre-salt areas in Brazil.

Pazflor in Angola came on stream in the second half of  2011 and unconventional gas production in North America is gradually increasing. Statoil is preparing for potential operatorship in the Eagle Ford shale in Texas over the next couple of years.

A great number of projects are now being matured toward investment decisions and represent part of the basis for further growth.