Grane back in full production 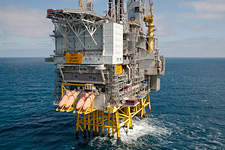 The Grane platform in the North Sea. (Photo: Øyvind Hagen)

The cut-back was caused by problems with the gear shaft on the platform’s injection compressor following an extensive overhaul of this equipment during a planned turnaround in September.

As soon as the difficulties were encountered, an action team was appointed to find a solution. The project resulted in a return to normal operation several weeks earlier than expected.

Grane produced some 30,000 barrels of oil per day during the slow-down, or roughly 20% of normal output.