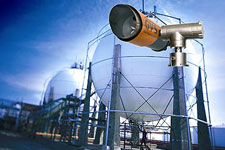 The camera technology has been tested at Kårstø for a year. This autumn, six cameras will be set up to monitor the main process where liquids are separated from the gas.

"When gas leaks out, the temperature around the leakage point falls," explains Ove Kim Korshamn, production supervisor at Kårstø.

"The cameras have infrared rays which register changes in temperature and visualise any gas leaks."

After thorough testing he is convinced that these cameras can help to identify gas leaks much earlier than today's systems.

According to Mr Korshamn, several very small gas leaks were discovered during the test period which the present gas detection system did not manage to detect.
The cameras come in addition to other conventional tools Statoil uses to identify hydrocarbons. The safety system with cameras has been patented by GasOptics, a company where Statoil's wholly-owned subsidiary, Statoil Innovation, is the main shareholder.

"We aim to be world-leading in the visualisation and detection of gas," says Stefan Nilsson, managing director of GasOptics.

"I'm pleased that Statoil has found this technology to be worthy."

He is convinced that the cameras will improve the safety and operation of the processing complex. The system is also being tested by Shell in St Fergus, Scotland and by Statoil in the Sleipner area of the North Sea.