Illustration of the Gjøa field in the North Sea.

"The first well to be drilled on Gjøa is an appraisal well in the northern segment," says vice president Kjetel Digre.

“The information gathered here will be important when we are going to look at the overall plan for wells and drainage strategy for Gjøa.”

New area
Gjøa is located in the Sogn area. With this development, a new part of the North Sea is being opened for oil and gas production. 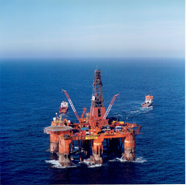 StatoilHydro has spent NOK 200 million on upgrading the Transocean Searcher rig for drilling on Gjøa.

Demanding
Up to 2012 the Transocean Searcher rig will be involved in drilling and completion activities on the field.

At the same time, field preparations will be made, including tie-in of pipes and cables to the platform.

”Since the area is located close to land, we must take into account the shipping traffic in the area among other elements,” points Mr Digre out.

StatoilHydro will have close to 20 vessels in operation in the Gjøa area during 2009.

“The project group believes that the overall coordination will be one of the main challenges in the time to come,” says Mr Digre. “We are well underway in our planning of these operations.”

The Gjøa reservoir itself has thin zones that will be drained. According to Mr Digre this will involve drilling of relatively demanding wells, of which several will be multilateral.

”We have a drilling and completion team which has been planning the drilling start on Gjøa for a long period of time,” says Mr Digre.

“Both we and the supplier are eager to get started. Even if there will be challenges in the time ahead, I know that the tools, rig and organisation are highly prepared.”

Vega is important
The activity will also be high on Vega and Vega South in 2009. The subsea systems on both satellite fields will be tested early in the year.

Coming milestones
The Gjøa field will be developed with a semi-submersible platform and five subsea templates. The topside will be constructed in Korea and shipped to Stord where the living quarters will be built.

The Gjøa platform will be assembled in the summer of 2009. Towing to the field and production start-up is scheduled for 2010.

The oil and gas pipelines will be laid in 2009. A power cable supplying electricity to Gjøa from the mainland will be installed in 2009 and tied to the platform in 2010. 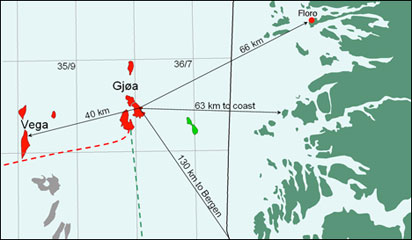