A key element in reaching our 60% recovery rate ambition on the Norwegian continental shelf (NCS) is now in place.

Statoil’s head of research, development and innovation Lars Høier underlined the importance of research and technology development in his welcome speech.

“The opening of the IOR centre is a milestone for us, but our main resource is still our clever and knowledgeable colleagues who create wonderful results in applying their skills.”

“The NCS is a workplace for the future. The resources are utilised in a sustainable manner and the recovery rate is record high, which benefit the employees and the financing of the Norwegian welfare state. We had not come this far without targeted efforts by the authorities and the oil companies. Research and technology development have been key elements in achieving the record-high recovery rate we already see on the NCS. If the recovery rate increases by one percent, it will increase our income from the NCS by NOK 300 billion.”

“Research and new technology will be key factors in times ahead to keep costs low and energy production and value creation high. For several decades Statoil has been highly instrumental in technology development on the NCS and is among the companies with the highest recovery rate. Today’s opening of Statoil’s IOR centre is significant for the future of the NCS, and illustrates that Statoil wants to contribute to optimal use of NCS resources also in the future.” 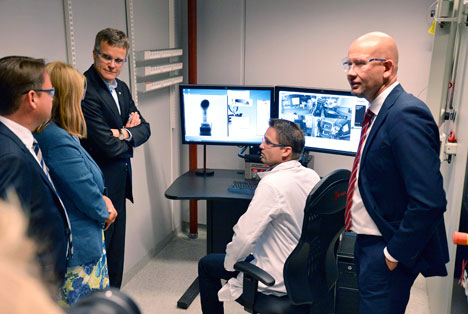 In connection with the opening of the IOR centre the guests and employees were given a guided tour of the new laboratories. Helge Lund and Tord Lien listen carefully.

Statoil has already approved measures that give the company and partners reason to expect an oil recovery rate above 50% on the NCS. A recovery rate of 50% represents an increase of 7.5 billion barrels based on the 30% estimate of the plan for development and operation (PDO) – corresponding to more than two Statfjord fields. This will create huge values for Norwegian society. The global average is currently 35%, according to the Norwegian ministry of petroleum and energy.

The main contribution to improved recovery is the drilling of new wells and maintenance of existing wells. The more wells we drill, the larger parts of the oil reservoirs we will reach. The IOR centre will play a key role in Statoil’s efforts to improve the efficiency of drilling operations.

The IOR centre will focus on improved recovery from all types of reservoirs on the NCS – old and new. Statoil will also use the technology to improve recovery on our international fields. 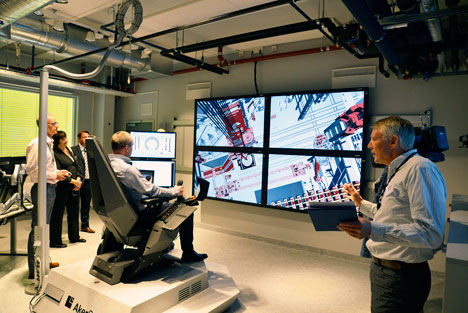 At the drilling lab the visitors were given a demonstration of tailored technology used to improve the efficiency of drilling operations.

Studying the pore level of core samples
The heart of the centre is a new industrial scanner with a 500 times higher resolution than a medical scanner. It will allow us to follow the oil movements and flows in various rocks on pore level. Through high-resolution 2D and 3D images it will be possible to see which IOR method is best suited in each reservoir, and at the same time get a deeper understanding of how the reservoir is formed with regard to clay, pore size and cracks.

“Our next goal is the oil which is difficult to extract. We have a steep learning curve ahead of us, which will be tougher for every percentage point we achieve, but these volumes are of high value to us. A dedicated IOR lab gives Statoil a unique opportunity to solve future IOR challenges,” he said.