Upgrading the accommodation at Troll by heavy lifts

Constructed by Apply Leirvik at Stord the modules will increase the accommodation capacity to 211 cabins.

This increase in the Troll A accommodation capacity was necessitated by a number of modifications scheduled later this year on the Troll field in the North Sea.

Great resources are being invested in ensuring high oil and gas deliveries for decades to come. Two new compressors and a new pipeline to Kollsnes are part of the plans.

With the modules in position substantial upgrading of the physical work environment will be possible. The planned renewal of the control room and office space extension will have the greatest operational impacts. 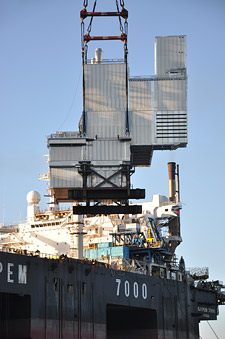 The Saipem cranes lifted the 1250-tonne southern accommodation module safely on board.

Some 5500 square metres of floor will be added, the equivalent of 45 Norwegian homes. Besides accommodating 150 new beds, both the kitchen and dining room will be upgraded, and new functional common areas for physical activities and recreation will be built in this new space.

Four “brackets” for the new living quarters were installed on Troll A in 2009. They will support two modules facing north and south to be connected by an intermediate building.

”The 2750-tonne modules represents a step change for the environment on board,” says Statoil’s project manager Erik Johannesen.

Equipment training is already completed, and the plant has been test run at Stord. The cook has tested the cooker. The old kitchen will be converted into a dining room. This work is scheduled to be completed in the spring of 2011.

With a new and sophisticated control room and a collaboration room for integrated operations (IO) on board, the Troll A platform’s communication with the onshore organisation will be optimal. The control room will be moved to the southern module during a scheduled maintenance shutdown in September this year.

”During the modification planning we looked into chartering a flotel, but finally decided that building new living quarters would be a better, more flexible solution,” says Leif Inge Sandven, leader, project management.

Regarding safety during the loading process, Sandven emphasises that extensive risk assessments were conducted in advance. Would it, for example, be necessary to shut down Troll A gas production during the lifting operation?

“Careful evaluations showed that parts of the production could run as normal, and we could perform the two-day loading operation in a safe and effective manner. Above all, careful weight calculations were performed for the platform. We also have a discipline leader for marine operations and a dedicated HSE inspector on board Saipem,” says Sandven.