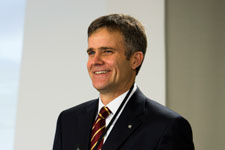 "Statoil delivered strong strategic progress in the third quarter. We added high-value barrels through the Bay du Nord discovery offshore Canada, the world's largest oil discovery this year. We also announced a major divestment to capture value created through asset development and unlock capital for investment in high-return projects. Our operational performance is good and we delivered solid earnings in the period," says Helge Lund, Statoil's president and CEO.

Statoil's net operating income of NOK 39.3 billion in the third quarter was positively impacted by gain from sale of assets. Refinery impairments and commercial provisions impacted the financial result negatively. The adjusted earnings were NOK 40.4 billion, which is in line with the same period last year.

The decrease in net income in the first nine months of 2013 is primarily explained by expected, lower production and reduced prices. Non-recurring items, related tax effects and higher gain from sale of assets last year contributed to the decrease.

"We are producing as planned, and maintain our production guidance for 2013. Our activity level is high. We are progressing our projects according to plan, with good cost control and capital discipline," says Lund.

Statoil increased equity production by 2% compared to the third quarter of 2012. Production grew by around 6%, taking into account the effects of divestments and redetermination on the Norwegian continental shelf. The company produced as expected in Norway, impacted by start-up and ramp-up, maintenance, divestments and redetermination. Outside Norway, Statoil increased production by 13% to a record 728 mboe per day, mainly due to ramp-up in US onshore, Angola and Brazil.

New discoveries added significant new resources in the third quarter. Statoil announced a new high-impact discovery offshore Canada, marking the company's third discovery in the Flemish Pass basin. Statoil now expects to complete around 60 exploration wells in 2013 and an activity level of around USD 3.75 billion in exploration for the year as a whole.

Statoil continued delivering on its strategy of active portfolio management. In September, the company announced a USD 2.65 billion divestment of assets on the Norwegian and UK continental shelves. Through this transaction, Statoil expects to realise significant gains, reduces future investment exposure by around USD 7 billion and demonstrates the underlying value of the company's portfolio.

Cash flows from underlying operations remain strong, and Statoil has strengthened its financial position in the period. The company reduced its net debt to capital employed from 21% in the second quarter to 17% at the end of the third quarter.

The quarter in brief

Statoil's net operating income was NOK 39.3 billion compared to NOK 40.9 billion in the third quarter of 2012.

Adjusted earnings after tax were NOK 12.1 billion, compared to NOK 11.9 billion in the third quarter of 2012.

West Hercules in the Barents Sea

*  Further strengthening the financial flexibility through the execution of debt capital market transactions of USD 3.4 billion on competitive terms.

*  The investigation report on the In Amenas terrorist attack was published on 12 September. Statoil will ensure that the recommendations are integrated and prioritised as part of the initiated improvement programme in the security area.

*  Impairment losses related to the Mongstad and Kalundborg refineries of NOK 4.2 billion due to lower margins and challenging outlook.

*  The Norwegian government announced in September that the full-scale carbon capture project at Mongstad (CCM) will be terminated. Statoil is now commencing work in order to ensure a smooth project conclusion.